The annexes written in English are juridical superior to other translations.

Each federation should make a copy available to its members, either systematically or on demand, in its own language and up dated.

1. The game and the players

1.1 Draughts is a mind sport between two players [1]
1.2 The people engaging this sport are defined as the players.
1.3 Draughts can be played on an amateur as well on a professional basis.

2.1. International draughts is played on a square board, divided into 100 equal squares, alternately black and white. This board is a draught board.
2.2. The game is played on the dark squares of the board. Thus, 50 squares are active.
2.3. The skewed lines formed by the dark squares are the diagonals. So there are 17 diagonals. The longest diagonal, which joins two corners of the board and comprises 10 squares, is called the long diagonal.
2.4. The board has to be placed between the two players in such a way that the long diagonal starts at the left hand side of each player. This way, the first square at the left hand, for each player is a dark square.
2.5. Thus positioned between the players, the board features the following items:
2.5.1. Bases: the side of the board facing each player, which are the promotion lines;
2.5.2. Sides: the squares at the side of the board, thus the first and/or the last column;
2.5.3. Rows: horizontal lines with 5 dark squares;
2.5.4. Columns: vertical lines with 5 dark squares.
2.6 The dark squares are as a convention, without actual writing numbers on the board, numbered from 1 to 50. This numbering follows the rows, from left to right, starting at the first square of the upper row and ending at the last square of the lowest row, with the following results:
2.6.1. The numbers on the bases or promotion rows are numbered 1 through 5, and 46 through 50;
2.6.2. The 5 squares of the sides, or the first and the last columns, are numbered at the left 6-16-26-36-46 and at the right 5-15-25-35-45;
2.6.3. The squares at the end of the long diagonal are numbered 5 and 46, and are called the corners of the board.
2.7. International draughts is played with 20 white or light coloured men, and 20 black or dark coloured men.
2.8. At the start of the game, the 20 black men are put on the squares with the numbers 1 to 20 and the 20 white men on those numbered 31 to 50. The squares with the numbers 21 to 30 are empty, or free.

3. The movement of the piece

3.1. A piece can be either a man or a king.
3.2. A man and a king have different ways of moving and capturing. The movement of one piece, either a man or a king, is called a "move".
3.3. The first move of a game is always for the player with the white men. The players play one move, each one at his turn, with their own pieces.
3.4. A man has to move, forwards over a diagonal, towards an empty square of the next row.
3.5: A king is a man, which reaches and stops at one of the squares of the promotion line nearest to his adversary, and is crowned with a man of the same colour.
3.6 : When a player reaches the promotion line both players may crown the man which stops at the promotion line. However if the opponent does not do this it is the obligation of the player to crown his man as part of his move. Not crowning a man promoted to King is considered an irregular move.
3.7 : A man promoted to King stays a King even if it is not crowned. Both players have the right to crown the man at a later moment (opposed to article 5.4). Playing with a King which is not yet crowned is an irregular move.
3.8. A king can move only after the opponent has played.
3.9. A king moves forwards and backwards over the successive free squares of the diagonal he occupies; thus he can come to rest, passing over free squares, on a distant free square.
3.10. The move of a piece is finished when the player has released the piece after moving it.
3.11. Whenever a player, who has the move, touches one of his playable pieces, he has to play with that piece, provided a legal move is possible.
3.12. As long as a piece during a move has not been released, the player can put it on another free square, if that is possible.
3.13. The player who has the move, and wishes to place his men more neatly on the squares, has to announce beforehand and clearly to his opponent, stating "I adjust" (or "j'adoube")
3.14. It is considered incorrect, when a player who does not have the move, touches or adjusts one or more of his men or of his opponent.

5.1. If during a game, the board is noted to be wrongly positioned regarding article 2.4., the game is annulled, and has to restart.
5.2. Compliance with article 2.8 has to be checked before the start of the game. For each irregularity noted during the game, article 5.4. below holds.
5.3. Each piece on a white square is inactive. It can be put into action, following the conditions of article 5.4. below.
5.4. If a player has committed one of the following irregularities, his opponent has the right to decide whether that irregularity must be rectified, or on the contrary, must be allowed to stand.
5.4.1. Playing two moves consecutively;
5.4.2. Moving a man or a king in an irregular way;
5.4.3. Touching one of one's pieces and then moving another one;
5.4.4. Taking back a move played;
5.4.5. Moving a piece of the opponent;
5.4.6. Playing a piece when a capture is possible;
5.4.7. Taking without reason one of the pieces from the board, either of the opponent or one's own;
5.4.8. Capture by a piece, of less or more than the number of possible pieces to capture;
5.4.9. Stopping during a multiple capture (released piece, see article 4.10);
5.4.10. Irregularly lifting a piece, during an unfinished multiple capture.
5.4.11. Taking, after a multiple capture, less pieces from the board, than captured;
5.4.12. Taking, after a capture, pieces that have not been jumped.
5.4.13. Stopping, during a multiple capture, in taking the pieces;
5.4.14. Taking, after a capture, one or more of one's own pieces.
5.4.15. Promoting a man to King without crowning him.
5.4.16. Playing with a King which is not yet crowned.
5.4.17. Using two hands for making the move and taking the captured pieces.
5.5. If by hazard or accident the position on the board is changed, this fact is not considered an irregularity provided it is noted at the same time.
5.6. If a player refuses to comply with the Official Game Rules, his opponent has the right to force his compliance.
5.7. If a player makes a move after his opponent has committed an irregularity or has refused to comply with the Official Game Rules, that move indicates an acceptance of the situation. Then a rectification can no longer be obtained.
5.8. A partial rectification of an irregularity or a refusal cannot be tolerated.

8.1. The active squares are numbered 1 to 50, according to article 2.6., so it is possible to note the moves of the pieces, move by move, both for the white and the black pieces, and thus replay or transcribe a whole game.
8.2. The transcription of the moves has to follow the following convention:
8.2.1. The number of the starting square, followed by the arrival square;
8.2.2. The two numbers may be separated by a hyphen (-) in the case of a simple move;
8.2.3. The two numbers may be separated by a cross (x) in case of a capture.

11. Variations of the game

[1] Whenever the masculine is used for a player, both male and female
players are intended.

On e-dama.net there are always open tournaments available for free registration.

If you have any problems with login, please contact goran.igaly@e-dama.net

Select the tournament you wish to play on

Go to page for registration to tournaments. This page will look like this:

Register yourself for the tournament 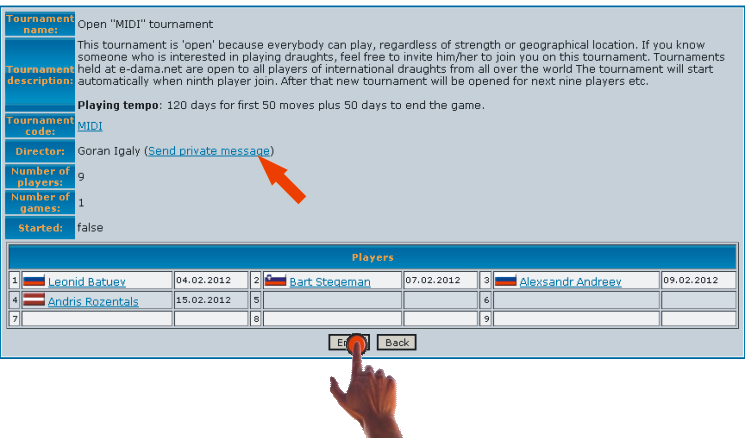 You just need to press button "Enter", and your name will be added to the list of participants. In this step, you can invite your draughts friends to play at the same tournament.
You just have to enter their email addresses or select them from the list of registered users on e-dama.net 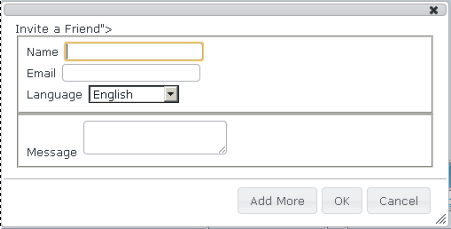 Your name will be added to the list of participants. Your registration is finished and you can press the button "Back"

If you need some further explanation about tournament, you can send a message to the tournament director.

What will happen after your registration

Your registration will be cancelled and your place will be free for other player.

You have to be logged in to do this. You can register for this tournament again later if you wish.

Numbers after the name of the tournament are respectively:

Number of vacation parts - used and allowed by tournament rules;

Minimal number of days that can be used in one part;

Maximal number of days that can be used in one part.

Select starting date of the vacation. This can be selected from pop-up calendar by clicking small calendar icon and the selecting day from the calendar: 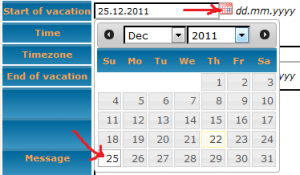 Ending date of the vacation should be selected on the same way as the starting date: 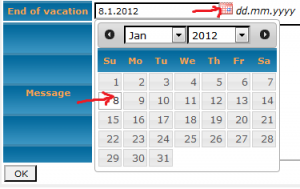 Staring (and ending) time of the vacation will be by default at midnight. If you like to change this, enter the number into input box (time is counted from 0 till 23 hours, no AM/PM):

Optionally, you can select time zone different from one that you are currently using: 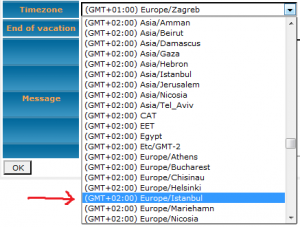 Finally, you can add (optional) message that will be sent to other players together with information about your vacation:

If everything was fine, you can submit data by clicking OK button: