Skip to primary content
Skip to secondary content
Third Brazilian Championship in Correspondence Draughts (10x10) on E-Dama will start on 20 February 2018. All Brazilian draughts players are invited to play for free on this tournament.
On the First Championship (21.3.2015.-15.9.2015.) the winner was Moisés dos Santos, second place was taken by Ezequiel Libonati, and the third place by Edilton Silva.
On Second Championship (22.7.2016.-12.2.2017.) the first place was shared between Allan Machado de Araujo and Ezequiel Libonati, and third place was taken by Gedson Albuquerque. 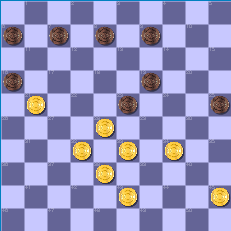 Currently there are 17 active players from Brazil on E-Dama (Edilton Silva, Luis Carlos Geremias, Moisés dos Santos, Gedson Albuquerque, Nilton César, Emanoel Libonati, ALLAN MACHADO DE ARAUJO, Fernanda, Ezequiel Libonati, João Anselmo Pontel, Jafé, Giovan Willian Ribeiro, Raphael Almeida, barbosa, Rafael Moraes, Domingos Sávio perego and José Roberto Santos Cleme), and we hope that this championship will be very interesting and will help to promote draughts game in Brazil.
On E-Dama you can find tournament tables and games from the First and Second Championship.
I hope this year there will be even more players on this interesting competition.
Tournament will start on 20 February 2018 and the tempo for playing will be 60 days for the first 40 moves and 20 days for finishing game.
Deadline for registration is 18 February 2018.
Please share the information about this tournament to your Brazilian draughts friends and I am sure that this will be very interesting competition!
Tournament director is Goran Igaly.